×
Go to content
×
Tinnitus & Trauma
The Link Between Tinnitus and Trauma
Let's start understanding the link between tinnitus and trauma. As with most things, scale is involved in terms of IMPACT. We tend to think of trauma as being in overwhelm, being immobilised, something insurmountable.
That IS the far end - the extreme of trauma. Wherever we may be on the trauma scale, our nervous systems have become DYSREGULATED and the Autonomic Ladder explains it really well.
The research on which the following examples are based, has led to major changes being implemented in main stream psychology and psychotherapy. I have included it in my 1-1 work since I found it, and it has been included in Module 2 of the Tinnitus E-Programme.
I have also included it in this site because, whether you use the TEP or not, work one to one with me or not, understanding it might help you
EXTRACT from : Ref. Dana, Deb A.. The Polyvagal Theory in Therapy: Engaging the Rhythm of Regulation (Norton Series on Interpersonal Neurobiology) (p. 9). W. W. Norton & Company
The Autonomic Ladder 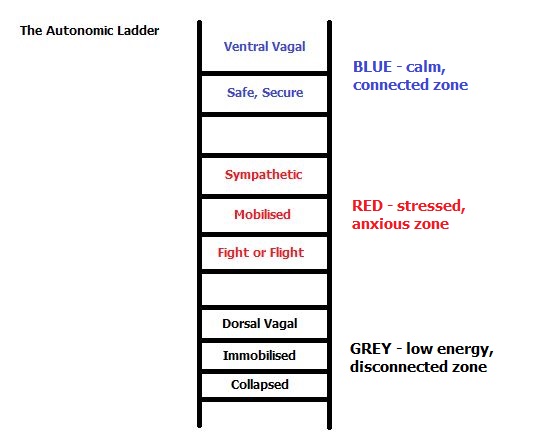 What might a real-life example of moving up and down the autonomic ladder look like? Consider the following two scenarios:
Scenario 1
I am driving to work in the morning listening to the radio and enjoying the beginning of the day (top of the ladder) when a siren sounds behind me (quick move down the ladder). I feel my heart race and immediately worry that I’ve done something wrong (staying in my spot down the ladder). I pull over and the police car rushes by me. I pull back out and resume my drive to work and feel my heart begin to return to its normal speed (moving up the ladder). By the time I get to work, I have forgotten about the incident and am ready for my day (back at the top of the ladder).
Scenario 2
I am having dinner with friends enjoying the conversation and the fun of being out with people I like (top of the ladder). The conversation turns to vacations, and I start comparing my situation to my friends’ situations. I begin to feel angry that I can’t afford a vacation, that my job doesn’t pay enough, that I have so many unpaid bills I’ll never be able to take a vacation (moving down the ladder). I sit back and watch as my friends continue to talk about trips and travel planning. I disconnect from the conversation and begin to feel invisible as the talk goes on around me (shutting down and moving to the bottom of the ladder). The evening ends with my friends not noticing my silence and with me feeling like a misfit in the group (stuck at the bottom of the ladder).
I go home and crawl into bed (the only place I know now is the bottom of the ladder).
The next morning, I wake up and don’t want to get up or go to work (still at the bottom of the ladder). I worry I’ll get fired if I don’t show up and drag myself out of bed (a bit of energy and beginning of movement up the ladder). I am late to work. My boss comments on my lateness, and I have a hard time holding in an angry response (continuing to move up the ladder with more mobilized energy). I decide I’ve had enough of this job and will seriously look for a new one (still moving up the ladder). I begin to consider the skills I can bring to a new job and that with the right job I will be able to pay my bills and maybe even take a vacation. I have lunch with a co-worker, and we talk about our jobs and dreams for the future (back at the top of the ladder).
Those two examples given by Deb Dana in her book are "every day" kind of examples that most of us are able to relate to.
The Autonomic Ladder and Tinnitus Distress
Think NOW - how do you move up and down the ladder? Include your "reactions" to tinnitus....
Example Scenario 3
John wakes at 6am when his bedside alarm goes off. He's not feeling great as he didn't get much sleep and immediately hears tinnitus screeching away as THAT was what kept him awake and he's frustrated, even angry (starts off in the middle of the ladder).
"Oh NO!" he thinks to himself "I've got that meeting to go to at 9am and I've not prepared well". He starts worrying about what his boss/others will think of him (stays in the middle of the ladder).
He thinks "I can't cope with all this! This tinnitus is driving me MAD!!!!" (STILL in the middle of the ladder).
Then, he thinks "I just can't be bothered with this life any more - it's all too much" (moving down to the bottom of the ladder)
"This tinnitus is never going to go - I'm stuck with it". John visualises a bleak future of the same thing happening for ever (at the bottom of the ladder)
"I'm useless at my job now. I can't sleep. Tinnitus is killing me" (stuck at the bottom of the ladder)
The bedside alarm repeats. "Aarrgghhhh!!!! That blasted thing! Go away! I don't WANT to go to work!" (moves up the ladder)
John gets up and starts busying himself getting ready for work - still thinking about how he hasn't prepared well for the meeting (still in the middle of the ladder)
He gets in to the shower. "Ah that feels good" he thinks as the warmth of the water showers over his body. "One of the few times I don't hear the tinnitus so much" (starts moving up the ladder)
John gets out of the shower and continues getting ready for work. Soon his persistent habit-formed thoughts intrude again and "THERE IT IS! That ***** noise!" (moves back down to the middle of the ladder)
As you can see, there is barely any time spent in the BLUE ZONE
Most of John's time is RED ZONE with periods in the GREY ZONE
THIS IS DYSREGULATION OF THE NERVOUS SYSTEMS
Can you see how John is constantly reacting? His body has become "CONDITIONED" to being this way, as has his thinking. His thinking is RE-ACTIVE. He has no sense of CONTROL
His nervous systems are dysregulated to the point of being unable to think clearly. This easily leads to spending even more time at the bottom of the ladder
The Tinnitus E-Programme walks you through from DYSREGULATION to your nervous systems being REGULATED and you getting your life back
The whole issue of tinnitus when surrounded and immersed in emotion, whether it's fear, anger, frustration, sadness, hopelessness or overwhelm is complex - but it is NOT unchangeable
GO TO TINNITUS E-PROGRAMME INTERVENTION
NEXT: More About Tinnitus & Trauma
DOWNLOAD THIS PAGE CONTENT IN PDF
Back to content